Newest members of the Flock

Today I managed to finish up work on the 3 newest members of the flock - Suess the Duce, Maverick and Bonnie Blue - just in time to make the trip to Bead Fest Philly.

First up is Suess the Duce, he is the younger brother of Suess who was the first of my mini-birds.

Second is Maverick"  who is on the left. It's hard to see it in the photo but he is wearing goggles which are copper electo-formed around his eyes. The "copper" disks in his neck are also electro-formed as well as his little boots. 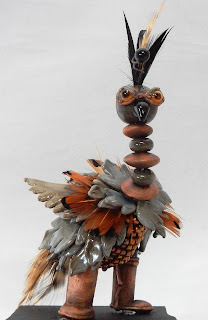 He began when the "Junior Bird Man" song started playing in my mind. I figured something kind of goofy, then the idea of the goggles, the combat boots and finally the copper plating.

But he ended up looking too serious and one night when I was working on him the was a piece about "Top Gun" and Tom Cruise and "he" decided he was "Maverick" - who am I to argue.

And lastly, ˆBonnie Blue. She makes me think of a sweet Southern belle.
Enough for now -