Much to write about these days - but first I need to vent about my old high school.  This was my reunion weekend, dare I mention which one?  Cass Tech was a very special school. First it was 8 stories high and we had 4 large elevators.

We had 27 curriculum there from Chem-Bio to Heating and Cooling. My graduating class was about 1,100 students, about 100 were those who graduated in January (this is probably dating me right there!)

The build has been empty for some time but I did not realize they had begun the demolition and was shocked to learn not only had they started but were at least 3/4 of the way to completion. 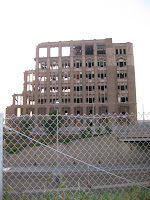 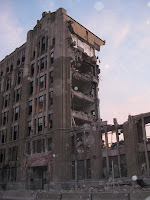 So here in Detroit we are losing another major landmark that should have been preserved and re-purposed.

The new Cass is doing well at producing high achieving students as well.  the current principal was there and announced that 98% of the graduating class of over 600 where headed to college and that 85% of the class had received scholarships.

The building is gone but the spirit lives on...
Posted by Fire Dance Beads & Jewelry at Monday, July 25, 2011